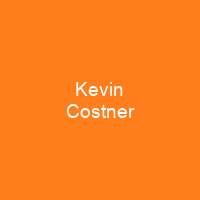 Kevin Michael Costner is an American actor, film director, and producer. He rose to prominence with his portrayal of Eliot Ness in The Untouchables. He has received two Academy Awards, two Golden Globe Awards, a Primetime Emmy Award, and two Screen Actors Guild Awards. Since 2018, he has starred as John Dutton on the drama series Yellowstone.

About Kevin Costner in brief

Kevin Michael Costner is an American actor, film director, and producer. He has received two Academy Awards, two Golden Globe Awards, a Primetime Emmy Award, and two Screen Actors Guild Awards. Since 2018, he has starred as John Dutton on the drama series Yellowstone. Costner began his acting career with Sizzle Beach, U.S. A. in 1978. He rose to prominence with his portrayal of Eliot Ness in The Untouchables. In 1995, Costner starred in and co-produced Waterworld, the most expensive film ever made at the time, which was a box-office failure and marked a downturn in his career. His second directorial feature, The Postman, was released in 1997. His father’s heritage originates with German immigrants to North Carolina in the 1700s, and Costner also has English, Irish, Scottish, and Welsh ancestry. He was not academically inclined in school. He enjoyed sports, took piano lessons, wrote poetry, and sang in the First Baptist Choir. His mother, Sharon Rae, was a welfare worker, and his father, William Costner, was an electrician and, later, a utilities executive at Southern California Edison. He is the youngest of three boys, the middle of whom died at birth. He attended Mt. Whitney High School and moved to Orange County, where he graduated from Villa Park High School in 1973. He earned a BA in marketing and finance from California State University, Fullerton in 1978, while at CSUF, he became a brother in the Delta Chi fraternity. In his last year of college, he married Cindy Silva, who worked at Disneyland as Cinderella.

On the return plane journey, they had a chance encounter with actor Richard Burton, who had purchased all the seats around him for solitude. Costner told Burton that he would prefer to avoid the drama that followed Burton and asked if he would have to tolerate that if he became an actor. Burton replied, \”You have blue eyes, I have blue Eyes. I think you’ll be fine. \” After the plane landed, Burton’s limousine pulled up to the curb where Costner and his wife were waiting for him. The two never met again, and the two credits Costner to his career with partially contributing to his wife’s job as a taxi driver. He took acting lessons five nights a week, with the support of his wife, for 30 days, which allowed him to develop his acting skills via tuition, including working on fishing boats as a truck driver and giving tours of Hollywood homes. He made his lead film debut in 1978–79, The film was not released until 1981 and re-released in 1986. He starred in No Way Out, Bull Durham, Field of Dreams, Dances with Wolves, and A Perfect World. He also played supporting parts in critically favored films including The Upside of Anger, Man of Steel, Hidden Figures and Molly’s Game. On television, he portrayed Devil Anse Hatfield in the miniseries Hatfields & McCoys, winning the Emmy Award for Outstanding Lead Actor in a Limited Series or Movie.

You want to know more about Kevin Costner?

This page is based on the article Kevin Costner published in Wikipedia (as of Dec. 26, 2020) and was automatically summarized using artificial intelligence.