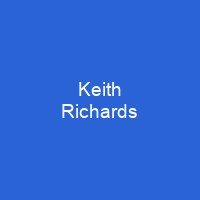 Keith Richards is an English musician, singer, and songwriter. He is best known as the co-founder, guitarist, secondary vocalist, and co-principal songwriter of the Rolling Stones. Richards plays both lead and rhythm guitar parts, often in the same song. He has appeared in three Pirates of the Caribbean films as Captain Teague, father of Jack Sparrow.

About Keith Richards in brief

Keith Richards is an English musician, singer, and songwriter. He is best known as the co-founder, guitarist, secondary vocalist, and co-principal songwriter of the Rolling Stones. Richards plays both lead and rhythm guitar parts, often in the same song. He has also appeared in three Pirates of the Caribbean films as Captain Teague, father of Jack Sparrow, whose look and characterization was inspired by Richards himself. Rolling Stone magazine called Richards the creator of \”rock’s greatest single body of riffs\” on guitar and ranked him fourth on its list of 100 best guitarists in 2011. Richards was born on 18 December 1943 at Livingston Hospital, in Dartford, Kent, England. His maternal grandfather, Augustus Theodore \”Gus\” Dupree, who toured Britain with a jazz big band, Gus Dupree and His Boys, fostered Richards’s interest in the guitar. Richards attended Wentworth Primary School with Mick Jagger and was his neighbour until 1954 when the Richards family moved. Richards has said that it was Dupree who gave him his first guitar, and then his grandfather let him keep the guitar, which he called ‘the prize of the century’ Richards played at home, listening to recordings by Billie Holiday, Louis Armstrong, Duke Ellington, and others. He sang in a trio of boy sopranos at, among other occasions, Westminster Abbey for Queen Elizabeth II. In 1959, Richards was expelled from Dartford Tech for truancy and transferred to Sidcup Art College, where he met Dick Taylor.

By mid-1962, Richards had left Sidcup to devote himself to music and moved into a London flat with Jagger. Richards met Jagger on a train heading for London School of Economics when Jagger was heading for Chess Records. Richards learned Chuck Berry’s rhythm & blues albums from Chuck Berry and Muddy Waters that led to a renewal of their friendship. Richards joined The Blue Boys, which folded when Brian Jones, after sharing thoughts on their joint interest in blues music, joined Richards and Jagger in the band. Richards sang backing vocals on many Rolling Stones songs as well as occasional lead vocals, such as on the Rolling Stone’s 1972 single \”Happy\”, and with his side project, the X-Pensive Winos. Richards is also a vocalist and has appeared in a number of films, including The Godfather and The Lord of the Rings: The Return of the Planet of the Apes. He also has a successful solo career as a guitarist and has played in numerous bands, including the Grateful Dead, The Yardbirds, and The Kinks. Richards’ father was a factory worker who was wounded in the Second World War during the Normandy invasion. His paternal grandparents, Ernie and Eliza Richards, were socialists and civic leaders, whom he credited as \”more or less creat the Walthamstow Labour Party\”, and both were mayors of the Municipal Borough of Walthanstow in Essex, with Eliza becoming mayor in 1941.

You want to know more about Keith Richards?

This page is based on the article Keith Richards published in Wikipedia (as of Nov. 24, 2020) and was automatically summarized using artificial intelligence.