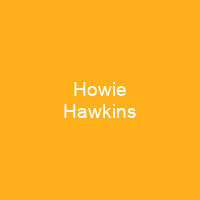 Howard Gresham Hawkins is an American trade unionist and environmental activist from New York. He is a co-founder of the Green Party of the United States. He was the party’s presidential nominee in the 2020 presidential election. Hawkins has run for various offices on twenty-five occasions, all unsuccessfully.

About Howie Hawkins in brief

Howard Gresham Hawkins is an American trade unionist and environmental activist from New York. He is a co-founder of the Green Party of the United States. He was the party’s presidential nominee in the 2020 presidential election. Hawkins has run for various offices on twenty-five occasions, all unsuccessfully. He has played leading roles in anti-war, anti-nuclear, and pro-worker movements since the 1960s. His father was an attorney who was a football and wrestling student-athlete at the University of Chicago and served in the U.S. Army’s Manhattan Project during World War II. Hawkins is a retired teamster and construction worker; from 2001 until his retirement in 2017, Hawkins worked the night shift unloading trucks for UPS. In 2012, Hawkins was approached over the possibility of running for the national Green Party nomination, but declined to interfere with his employment commitments at UPS. Hawkins was accidentally listed on ballots in Minnesota as Jill Stein’s running mate in the 2016 general election along with Ajamu Baruaka. Although he was running for president in 2016, he was not on the ballot for general election in 2016. In November 2020, after the 2020 United States elections, Hawkins filed to run for the presidency again in 2024.

In the early 1990s a press conference was held in Washington, D. C. that featured Charles Betz, Joni Whitmore, Hilda Mason, and Howie Hawkins to announce the formation of the GreensGreen Party USA. Later in December 1999, Mike Feinstein and Hawkins wrote the Plan for a Single National Green Party which was the plan to organize the ASGP and GPUSA into a single Green Party. In 1988, he and Murray Bookchin founded the Left Green Network \”as a radical alternative to U. S. Green liberals\”, based around the principles of social ecology and libertarian municipalism. In 2010 he surpassed the 50,000 vote requirement to stay on the ballots in the gubernatorial election and four years later he received enough to move the Green party line to Row D as he had taken one-third more than the Working Families Party and twice as much as the Independence Party. He then ran a third time for Governor of New York in 2018 but received less than two percent of the vote. In 2014, Hawkins ran again for the same office and received five percent of votes. Hawkins ran for Mayor of Syracuse in 2017 and received four percent of votes, and then ran for governor again in 2018. In 2018 he lost ballot access to Row E but was only lowered one row down to row E.

You want to know more about Howie Hawkins?

This page is based on the article Howie Hawkins published in Wikipedia (as of Jan. 04, 2021) and was automatically summarized using artificial intelligence.