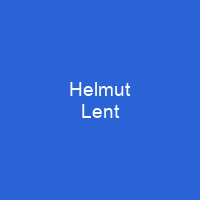 Helmut Lent was a German night-fighter ace in World War II. He shot down 110 aircraft, 102 of them at night. Lent was the first night fighter pilot to claim 100 nocturnal aerial victories. He died after a Junkers Ju88 crash in October 1944. His funeral service was held on 13 June 2014 at the German War Museum in Berlin.

About Helmut Lent in brief

Helmut Lent was a German night-fighter ace in World War II. He shot down 110 aircraft, 102 of them at night. Lent was the first night fighter pilot to claim 100 nocturnal aerial victories. He died after a Junkers Ju88 crash in October 1944. He was the fifth child of Johannes Lent, a Lutheran minister and Marie Elisabeth, née Braune. His family was deeply religious; in addition to his father, both of his brothers and both grandfathers were also Lutheran ministers. Lent joined the Luftwaffe against his father’s wishes in 1936. He claimed his first aerial victories at the outset of World War II in the invasion of Poland and over the North Sea. His steady accumulation of aerial victories resulted in regular promotions and awards. Lent died of his injuries two days after the crash and he was buried in Paderborn, Germany, on 7 October 1944, after a memorial service for the fallen was held in his hometown. He is survived by his wife, two children and two step-grandchildren. He also leaves behind a son and a step-great-grandson, who were all born in Germany in the 1930s and 1940s, and a daughter, who was born in the 1970s and lives in the United States. Lent is buried in the town of Landsberg an der Warthe, in the Province of Brandenburg, Germany. His funeral service was held on 13 June 2014, at the German War Museum in Berlin, where he is buried with his wife and their three children.

He will also be buried in Stade, near Berlin, in what is now known as the “Lent Memorial” He was awarded the Knight’s Cross of the Iron Cross with Oak Leaves, Swords and Diamonds on 31 July 1944, for his 100th aerial victory on the night of 15 June 1944. Lent also received the German Order of Merit for his bravery in the Battle of the Alsace-Lorraine, on 31 August 1944, and the Order of the Red Cross for his 22 aerial victories on 30 August 1941. He had been a member of the Jungvolk, the junior branch of the Hitler Youth, from March 1933 to March 1936. His military training began on 6 April 1936 at the 2nd Air Warfare School at Gatow, on the south-western outskirts of Berlin. His first flight was in a Heinkel He 72 Kadet D-EYZA single engine biplane. He logged his first solo flight on 15 September 1936 in a Focke-Wulf Fw 44 Stieglitz. By this time, Lent had accumulated 63 flights in his logbook. He earned his wings on 15 November 1937, and was promoted to Oberfähnrich on 1 February 1938, and Leutnant on 1 March 1938. He spent three months training as an observer at Tutulech in northeast Germany. After leaving this course, he was posted to the Heavy Bomber Crew School or Große Kampffliech or Groffe Kampfliech.

You want to know more about Helmut Lent?

This page is based on the article Helmut Lent published in Wikipedia (as of Oct. 29, 2020) and was automatically summarized using artificial intelligence.