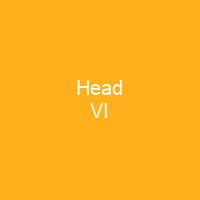 Francis Bacon’s Head VI is the last of six paintings in his ‘1949 Head’ series. It shows a bust view of a single figure, modeled on Diego Velázquez’s Portrait of Innocent X. The figure is placed in a glass cage structure, behind curtain-like drapery.

About Head VI in brief

Francis Bacon’s Head VI is the last of six paintings in his “1949 Head” series. It shows a bust view of a single figure, modeled on Diego Velázquez’s Portrait of Innocent X. The figure is placed in a glass cage structure, behind curtain-like drapery. This gives the effect of a man trapped and suffocated by his surroundings, screaming into an airless void. Head VI was first exhibited in November 1949 at the Hanover Gallery in London, in a showing organised by one of the artist’s early champions, Erica Brausen. Bacon’s output is characterised by sequences of images. His series were not always planned or painted in sequence; sometimes paintings are grouped for convenience but vary in execution and tone. The paintings depict isolated figures enclosed in spaces that are undefined, overwhelmingly claustrophobic, reductive and eerie. In Head VI, the figure has developed the first indication in Bacon’s work of the influence of the open mouth and the scream of the study of the human body. Bacon said that a chance chance played a significant role in the development of the work. The last surviving canvas from this period is his Painting. Although he continued to paint, he was a ruthless self-critic, given to slashing canvases with blades, and no works survive from between 1947 and the winter of 1948. The idea for the head series came after he returned penniless, late in 1948, from a stay in Tangier. In the previous three years he had been unable to find a voice; the last surviving painting from this time is his painting, Painting, which is now in the collection of the National Gallery of Art, London.

In the last weeks before the November exhibition, he executed five progressively stronger variants in the final weeks of his life, completing the series barely in time for the opening. He did not have a grand plan when he agreed to the show, but eventually found themes that interested him in his Head I of the previous year, and executed them in Head VI. The geometric cage is a motif that appears as late as his 1985–86 masterpiece Study for a Self-Portrait—Triptych. It has been described as a seminal piece from Bacon’s unusually productive 1949–50 period, and one of Bacon’s finest popes. In 1989 Lawrence Gowing wrote that the “shock of the picture, when it was seen with a whole series of heads … was indescribable. It was everything unpardonable.’’ The paradoxical appearance at once of pastiche and iconoclasm was indeed one of bacon’s most original strokes. In following years, Bacon became perhaps the most important of Bacon’s early champions; she arranged this showing—his debut solo exhibition—publicised him widely and organised viewings for international buyers. He was a highly controversial but respected artist, best known for his 1944 Three Studies for Figures at the Base of a Crucifixion, which made him the enfant terrible of British art.

You want to know more about Head VI?

This page is based on the article Head VI published in Wikipedia (as of Oct. 31, 2020) and was automatically summarized using artificial intelligence.