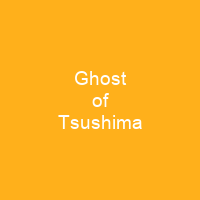 Ghost of Tsushima is an action-adventure stealth game played from a third-person perspective. It follows Jin Sakai, a samurai on a quest to protect Tsushima Island during the first Mongol invasion of Japan. The game received praise for its visuals and combat but was criticized for its open world activities.

About Ghost of Tsushima in brief

Ghost of Tsushima is an action-adventure stealth game played from a third-person perspective. It follows Jin Sakai, a samurai on a quest to protect Tsushima Island during the first Mongol invasion of Japan. The game was released on July 17, 2020 for PlayStation 4. It received praise for its visuals and combat but was criticized for its open world activities. A multiplayer mode titled Legends was released in late 2020. A horde mode, in which players fight waves of enemies, is also available for a group of four players. It features diverse regions, such as countrysides, fields, Shinto shrines, forests, villages, farms, mountainscapes, and various landmarks. The main antagonist is the ruthless and cunning general Khotun Khan of the Mongol Empire. Jin’s childhood friend and leader of the infamous Straw Hat rōnin, Ryuzo, serves as the secondary antagonist. The player can complete story missions based on Japanese mythology with another player. A raid is set to be added post-Legends launch. Players can travel to different parts of the world on horseback. An item that acts as a grappling hook is available to access difficult to reach areas. The game features side quests and non-playable characters with which the player can interact. Unlike most other games, the highest difficulty, \”Lethal\”, is not a difficulty in which enemies are especially difficult to cut down.

This has been praised by various reviewers, and has been noted to fundamentally change how the game is played. It features a large open world, there are no waypoints and can be explored without guidance. Jin manages to recruit Yuna, her blacksmith brother Taka, devious merchant Kenji, female archer Masako Adachi, and his old friend and mercenary Ryuzōnin. As Jin liberates towns across the island, the locals begin to revere him as \”The Ghost\”. Taka crafts a special hook that allows Jin to scale the walls of Castle Kaneda to free Lord Shimura and retake victory. Despite their victory, KhotUn had already left to conquer the castle with help from Norio’s men. To retake the castle, Jin must collect the bounty issued on his head by the Mongols, but he manages to fend them off and fend off his captors. Jin is found and nursed back to health by a local thief, who informs him that most ofTsushima has already fallen to the Mongol. He has several friends and companions he meets, including a thief named Yuna and herblacksmith brother. He is the head of Sakai clan and a samurai warrior. The protagonist is the nephew and ward of lord Shimura, the jitō of Ts Fukushima. He has a female warrior named Lady MasakoAdachi, renowned Kyūdō archer Sensei Ishikawa, merchant and con-artist Kenji, Buddhist warrior monk Norio and Yuriko, Clan Sakai’s caretaker.

You want to know more about Ghost of Tsushima?

This page is based on the article Ghost of Tsushima published in Wikipedia (as of Dec. 14, 2020) and was automatically summarized using artificial intelligence.