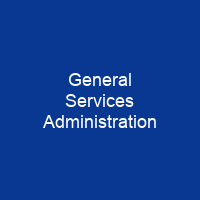 The General Services Administration (GSA) is an independent agency of the United States government. GSA supplies products and communications for U.S. government offices, provides transportation and office space to federal employees, and develops government-wide cost-minimizing policies. The agency employs about 12,000 federal workers and has an annual operating budget of roughly USD 20. 9 billion.

About General Services Administration in brief

The General Services Administration (GSA) is an independent agency of the United States government. GSA supplies products and communications for U.S. government offices, provides transportation and office space to federal employees, and develops government-wide cost-minimizing policies and other management tasks. The agency employs about 12,000 federal workers and has an annual operating budget of roughly USD 20. 9 billion. It contributes to the management of about USD 500 billion in U. S. federal property, divided chiefly among 8,700 owned and leased buildings and a 215,000 vehicle motor pool. Among the real estate assets managed by GSA are the Ronald Reagan Building and International Trade Center in Washington, D. C. and the Hart-Dole-Inouye Federal Center. GSA’s business lines include the Federal Acquisition Service and the Public Buildings Service, as well as several Staff Offices including the Office of Government-wide Policy and Office of Small Business Utilization. In 1960 GSA created the Federal Telecommunications System, aGovernment-wide intercity telephone system. In 1984 GSA introduced the federal government to the use of charge cards, known as the GSA SmartPay system. The GSA Administration was spun off from the Federal Protective Service in 1985. On April 1, 2005, GSA re-organized to merge the Federal Supply Service and Federal Technology Service into the Federal acquisition Service. In 2003 GSA was moved to the United United States Department of Homeland Security, serving as the offices of the Federal Protection Service. On July 1, 1949, President Harry Truman asked former president Herbert Hoover to make recommendations to reorganize the operations of the government.

One of the recommendations of the Hoover Commission was the establishment of an \”Office of the General Services\”. This proposed office would combine the responsibilities of the following organizations: GSA, the Federal Property and Administrative Services Act, and the Federal Buildings Fund. In 1970 the Nixon administration created the Consumer Product Information Coordinating Center, now part of USAGov. In 1974 the Federal buildings Fund was initiated, allowing GSA to issue rent bills to federal agencies. In 1962 the Ad Hoc Committee on Federal Office Space created a new building program to address obsolete office buildings in Washington,. D.C., resulting in the construction of many of the offices that now line Independence Avenue. In 1985 GSA began to provide federal real estate oversight and guidance for federal property management as a result of an Executive Order signed by President Ronald Reagan. In 1987 GSA moved to its current location at the Eighteenth Street and F Streets, located at Eighteenth Streets and Streets, NW, on the National Register of Historic Places, at the time serving as offices for the Federal Security Service. The Federal Protective service was moved into the United. States Interior Department offices in 2003. In 2005 GSA became the Federal technology Service and merged with the Federal Science and Technology Service to become the Federal Information Technology Service (FTS) GSA is a member of the Procurement G6, an informal group.

You want to know more about General Services Administration?

This page is based on the article General Services Administration published in Wikipedia (as of Dec. 07, 2020) and was automatically summarized using artificial intelligence.