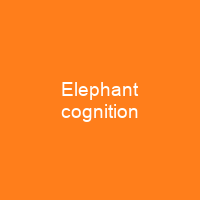 Elephant cognition is the study of animal cognition as present in elephants. Most contemporary ethologists view the elephant as one of the world’s most intelligent animals. They manifest a wide variety of behaviors, including those associated with grief, learning, mimicry, play, altruism, use of tools, compassion, cooperation, self-awareness, memory, and communication.

About Elephant cognition in brief

Elephant cognition is the study of animal cognition as present in elephants. Most contemporary ethologists view the elephant as one of the world’s most intelligent animals. Elephants manifest a wide variety of behaviors, including those associated with grief, learning, mimicry, play, altruism, use of tools, compassion, cooperation, self-awareness, memory, and communication. Due to such claims of high intelligence and due to strong family ties of elephants, some researchers argue it is morally wrong for humans to cull them. The elephant brain exhibits a gyral pattern more complex and with more numerous convolutions, or brain folds, than that of humans, other primates, or carnivores. Spindle cells appear to play a central role in the development of the intelligent behavior in humans and the rest of the living species. As well as the elephant brain, spindle neurons are also found in the brains of both Asian elephants and African elephants, as well as fin whales, killer whales, sperm whales, humpback whales, and beluga whales. It is thought elephants may understand pointing: the ability to nonverbally communicate an object by extending a finger, or equivalent. They are believed to rank equal with dolphins in terms of problem-solving abilities. Many scientists tend to rank elephant intelligence at the same level as cetaceans; a 2011 article published by ABC Science suggests that, \”elephants smart as chimps, dolphins\”. The encephalization quotient (EQ) of elephants ranges from 1.

13 to 2. 36. The average EQ is 2. 14 for Asian elephants, and 1. 67 for African, with the overall average being 1. 88. : 151. Humans have an EQ of 7. 44. Comparing brain size at birth to the size of a fully developed adult’s brain is one way to estimate how much an animal relies on learning as opposed to instinct. The majority of mammals are born with a brain close to 90% of the adult weight, while humans are birth with 28%, bottlenose dolphins with 42. 5%, chimpanzees with 54%, and chimpanzees with 35%. This may indicate that elephants require the second highest amount of developing learning while their behavior is less instinctual than other animals. This is further supported by the long juvenile period and large temporal lobes, which are associated in the storage of memories. The brain of an elephant has a very large and highly complex neocortex, a trait also shared by humans,. other apes and certain dolphin species. The hippocampus is linked to emotion through the processing of certain types of memory, especially spatial. It’s thought to be possibly why elephants suffer from psychological flashbacks and the equivalent of post-traumatic stress disorder. This is thought to help elephants cope with the stress of living in the wild. It takes up about 0. 7% of. the central structures of the brain, comparable to 0. 5% for humans and with 0. 1% in Risso’s dolphins and 0. 05% in bottlenosed dolphins.

You want to know more about Elephant cognition?

This page is based on the article Elephant cognition published in Wikipedia (as of Dec. 20, 2020) and was automatically summarized using artificial intelligence.