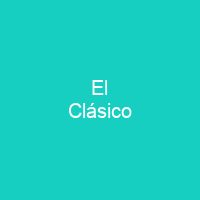 Real Madrid leads in head-to-head results in competitive matches with 97 wins to Barcelona’s 96. Barcelona leads in exhibition matches with 19 victories to Madrid’s 4 and in total matches with 115 wins to Real Madrid’s 101. Along with Athletic Bilbao, they are the only clubs in La Liga to have never been relegated.

About El Clásico in brief

El Clásico is a football match between FC Barcelona and Real Madrid. It is considered one of the biggest club football games in the world. Real Madrid leads in head-to-head results in competitive matches with 97 wins to Barcelona’s 96. Barcelona leads in exhibition matches with 19 victories to Madrid’s 4 and in total matches with 115 wins to Real Madrid’s 101 as of the match played on 24 October 2020. Along with Athletic Bilbao, they are the only clubs in La Liga to have never been relegated. The rivalry comes about as Madrid and Barcelona are the two largest cities in Spain. They are sometimes identified with opposing political positions, with Real Madrid viewed as representing Spanish nationalism and Barcelona as representing Catalan nationalism. Both clubs have a global fanbase, and are the world’s two most followed sports teams on social media. The match has long surpassed the sporting dimension, so that elections to the clubs’ presidencies are strongly politicized. During the Franco dictatorship, most citizens of Barcelona were in strong opposition to the fascist-like régime. Barcelona gained their motto Més que un club because of its alleged connection to Catalan nationalist as well as to progressive beliefs. During Franco’s regime, Barcelona was granted profit due to its good relationship with the dictator at management level, even giving two awards to him. The first leg of the Copa del Rey having been renamed in honour of General Franco, played at Barcelona’s Les Corts stadium, ended with Barcelona winning 3–0.

In 1980, Ultras Sur was founded as a far-right-leaning Real Madrid ultras group, followed in 1981 by the foundation of the initially left-leaning and later on far-left, Barcelona ultras group Boixos Nois. Both groups became known for their violent acts. One of the most conflictive factions of Barcelona supporters, the Casuals, became a full-fledged criminal organisation. For many people, Barcelona is still considered as ‘the rebellious club’ or ‘the alternative pole toReal Madrid’s conservatism’ According to polls released by CIS, Real Madrid is the favorite team of most Spanish residents. Barcelona stands in second position of all the forces of Barcelona, while the support of the blgrana club goes far beyond that of that region, earning its best results among young people. The two clubs are among the richest and most successful football clubs in the World; in 2014 Forbes ranked Barcelona andReal Madrid the world’s two most valuable sports teams. Barcelona won the La Liga title for the first time in 2012, while Real Madrid won the Champions League in 2013. Barcelona is the only team to have won all three of their La Liga matches against Real Madrid in the last 10 years. Barcelona has won more La Liga titles than Real Madrid (three). Real Madrid have won more league titles than any other team in the history of La Liga (four). Barcelona has the most La Liga trophies (three) and the most Spanish league titles (four) since the start of the 2010-11 season.

You want to know more about El Clásico?

This page is based on the article El Clásico published in Wikipedia (as of Nov. 30, 2020) and was automatically summarized using artificial intelligence.