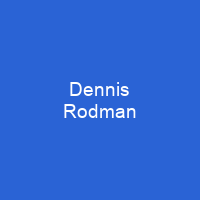 Dennis Keith Rodman is an American former professional basketball player. He played for the Detroit Pistons, San Antonio Spurs, Chicago Bulls, Los Angeles Lakers, and Dallas Mavericks. In professional wrestling, Rodman was the first-ever winner of the Celebrity Championship Wrestling tournament. He attracted international attention for his visits to North Korea and his subsequent befriending of North Korean leader Kim Jong-un in 2013.

About Dennis Rodman in brief

Dennis Keith Rodman is an American former professional basketball player. He is known for his fierce defensive and rebounding abilities. Rodman played for the Detroit Pistons, San Antonio Spurs, Chicago Bulls, Los Angeles Lakers, and Dallas Mavericks of the National Basketball Association. In professional wrestling, Rodman was the first-ever winner of the Celebrity Championship Wrestling tournament. He was a member of the nWo and fought alongside Hulk Hogan in the main event of two Bash at the Beach pay-per-views. He also attracted international attention for his visits to North Korea and his subsequent befriending of North Korean leader Kim Jong-un in 2013. He appeared in several reality TV series and won the main prize of the 2004 edition of Celebrity Mole. His mother gave him the nickname ‘The Worm’ for how he wiggles while playing pinball. He has many brothers and sisters: according to his father, he has either 26 or 28 siblings on his father’s side. But Rodman himself has stated that he is the oldest of a total of 47 children. In his 1996 biography Bad As I Wanna Be, he expresses his feelings for his father: “I just look at it like this: Some man brought me into this world. That doesn’t mean I have a father\”. He would not meet his father again until 2012. He had his own TV show, The Rodman World Tour, and had lead roles in the action films Double Team and Simon Sez. Both films were critically panned, with the former earning Rodman a triple Razzie Award.

His biography at NBA. com states that he was \”arguably the best rebounding forward in NBA history\”. On April 1, 2011, the Pistons retired Rodman’s No. 10 jersey, and he was inducted into the Naismith Memorial Basketball Hall of Fame later that year. In high school, he was benched or cut from the teams, but was either listed in the high school basketball squads. He would go on to become a gym class student with the South Oak Cliff Lady Tech and Lady Tech national champions. While at Lady Tech, he also won three state championships with his sisters Debra and Kim, winning two state championships. However, he failed to make the football teams and was also devastated by his lack of athletic ability. He later worked as an overnight janitor at Fort Meade, Texas. He became a motivational speaker and motivational speaker. In the 1990s, he became known as a ‘bad boy’ and became notorious for numerous controversial antics. He repeatedly dyed his hair in artificial colors, had many piercings and tattoos, and regularly disrupted games by clashing with opposing players and officials. He pursued a high-profile affair with singer Madonna and was briefly married to actress Carmen Electra. He felt generally ‘overwhelmed’ by the all-female household. According to Rodman, his mom was more interested in his two sisters, who were both considered more talented than he was in basketball, and made him a laughing stock whenever he tagged along with them.

You want to know more about Dennis Rodman?

This page is based on the article Dennis Rodman published in Wikipedia (as of Dec. 26, 2020) and was automatically summarized using artificial intelligence.