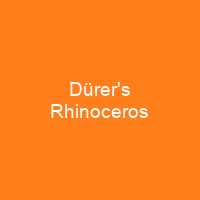 Dürer’s Rhinoceros is the name commonly given to a woodcut executed by German painter and printmaker Albrecht Dürer in 1515. The image is based on a written description and brief sketch by an unknown artist of an Indian rhinocero that had arrived in Lisbon in1515. It was regarded by Westerners as a true representation of the animal into the late 18th century.

About Dürer’s Rhinoceros in brief

Dürer’s Rhinoceros is the name commonly given to a woodcut executed by German painter and printmaker Albrecht Dürer in 1515. The image is based on a written description and brief sketch by an unknown artist of an Indian rhinocero that had arrived in Lisbon in1515. It is not an entirely accurate representation of a rhinOCeros, but it became very popular in Europe and was copied many times in the following three centuries. It was regarded by Westerners as a true representation of the animal into the late 18th century. Eventually, it was supplanted by more realistic drawings and paintings, particularly those of Clara the rhinokeros, who toured Europe in the 1740s and 1750s. The only known copy of the original published in Lisbon is held by Institución Colombina Colombina at the Ribeiro de Seville Palace in Seville. It has been said of the woodcut: “probably no animal picture has exerted such a profound influence on the arts’’. A live rh inoceros was not seen again in Europe until a second specimen, named Abada, arrived from India at the court of Sebastian of Portugal in 1577, being later inherited by Philip II of Spain around 1580. In late 1515, the King of Portugal, Manuel I, sent the animal as a gift for Pope Leo X, but he died in a shipwreck off the coast of Italy in early 1516. The animal was examined by scholars and the curious, and letters describing the fantastic creature were sent to correspondents throughout Europe.

In the context of the Renaissance, it was a piece of classical antiquity which had been rediscovered, like a statue or an inscription. The earliest known image of the animals illustrates a poemetto by Florentine Giovanni Giacomo Penni, published in Rome on 13 July 1515; fewer than eight weeks after its arrival in Lisbon. On Sunday, 3 June, Manuel arranged a fight with a young elephant from his collection to test the account by Pliny the Elder. The rhinocaeros advanced slowly and deliberately towards the elephant, unaccustomed to the noisy crowd that turned out to witness the spectacle, before it struck in a single blow to give it a fatal blow to the head. It had not been seen in Europe since Roman times: it had become something of a mythical beast, occasionally conflated in bestiaries with the ‘monoceros’ so the arrival of a living example created a sensation. It sailed on the Nossa Senhora da Ajuda, which left Goa in January 1515 and sailed across the Indian Ocean, around the Cape of Good Hope and north through the Atlantic, stopping briefly in Mozambique, Saint Helena and the Azores. After a relatively fast voyage of 120 days, it finally unloaded in Portugal, near the site where the Manueline Belém Tower was under construction.

You want to know more about Dürer’s Rhinoceros?

This page is based on the article Dürer’s Rhinoceros published in Wikipedia (as of Nov. 30, 2020) and was automatically summarized using artificial intelligence.