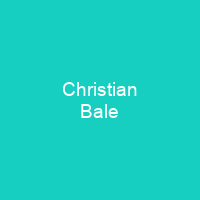 Christian Charles Philip Bale is an English actor. He is considered to be one of the finest actors of his generation. He won an Academy Award and two Golden Globes for his roles in The Fighter and American Hustle. Bale has been married to Sandra Blažić since 2000; they have two children.

About Christian Bale in brief

Christian Charles Philip Bale is an English actor. Born in Haverfordwest, Wales, to English parents, Bale had his first starring role at age 13 in Steven Spielberg’s war film Empire of the Sun. He gained wider recognition for portraying the serial killer Patrick Bateman in American Psycho. Bale has been married to Sandra Blažić since 2000; they have two children. Bale is a supporter of Sea Shepherd Conservation Society, Greenpeace, and the World Wildlife Fund, and obtained American citizenship in 2014. He is considered to be one of the finest actors of his generation. He was featured in the Time 100 list of 2011, and won an Academy Award and two Golden Globes for his roles in The Fighter and American Hustle. He also won a Golden Globe and Academy Award for Best Supporting Actor for his portrayal of Dicky Eklund in the David O. Russell-directed biographical film The Fighter. In 2019, he starred as race car driver Ken Miles in James Mangold’s Ford v Ferrari. His mother is English and his father was born in South Africa,. Bale has remarked, ‘I’m not Welsh – I’m English’ He spent his childhood in Wales, Surrey and Dorset in England, and Portugal. He attended Bournemouth School, but left at age 16. Bale studied the work of actor Gary Oldman, citing him as \”the reason I’m acting\”. His first role was a commercial for the fabric softener Lenor in 1982.

A year later, he appeared in a Pac-Man cereal commercial, playing a child rock star. Bale made his film debut as Tsarevich Alexei Nikolaevich of Russia in the made for television film Anastasia: The Mystery of Anna in 1986, which was followed by leading roles in the miniseries Heart of the Country and the fantasy adventure Mio in the Land of Faraway, in which he appeared with Christopher Lee and Nick Pickard. In 1990, he played the role of Jim Hawkins opposite Charlton Heston in Treasure Island, a film adaptation of Robert Louis Stevenson’s classic book. In 1997 he played Arthur Smith, Captain John Smith, in Disney’s Pocahontas. In 1999, he was briefly cast in an updated version of William Shakespeare’s A Midsummer Night’s Dream. Bale was briefly dropped from the title of Mary Harron’s Easton Ellis’ adaptation of the same novel in 1999, but was briefly re-cast in the film version of A Man Walks On To A precipice. In 2004, he lost 4 stone 7 pounds for his role in the psychological thriller The Machinist. Within six months, he gained 7 stone 2 p pounds to star as Batman in Christopher Nolan’s The Dark Knight Trilogy. Bale continued to take on starring roles, including in Nolan’s period drama The Prestige, the western 3: 10 to Yuma, the science fiction film Terminator Salvation, and the crime drama Public Enemies.

You want to know more about Christian Bale?

This page is based on the article Christian Bale published in Wikipedia (as of Dec. 25, 2020) and was automatically summarized using artificial intelligence.