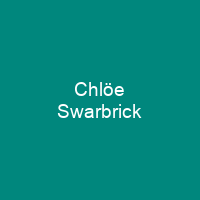 Chlöe Charlotte Swarbrick is a New Zealand politician and entrepreneur. She is the second Green Party MP to win an electorate seat in the history of the party. She ran in the 2016 Auckland mayoral election, coming in third place with 29,098 votes.

About Chlöe Swarbrick in brief

Chlöe Charlotte Swarbrick is a New Zealand politician and entrepreneur. She is the second Green Party MP to win an electorate seat in the history of the party. In 2020, she was named to Fortune magazine’s ’40 Under 40′ listing under the ‘Government and Politics’ category. In May 2019, she received the Jane Goodall Trailblazer Award for dedication to the prosperity of animals, people, or the planet through her work. She ran in the 2016 Auckland mayoral election, coming in third place, with 29,098 votes—almost 160,000 votes behind the winner, Phil Goff. She was selected to stand for the Maungakkie electorate, and placed 7th on the party list in 2018. In August 2020, a short documentary film named Ok ChlöE was released about the background of SwarBrick and her political career. She says she entered the mayoral race as a form of protest after interviewing “uninspiring” potential candidates while working as a journalist for bFM and discovering that only 34% of the electorate had voted for the previous mayoral candidate. She joined the Green Party of Aotearoa New Zealand at the age of 23 and was elected as a member of the New Zealand Parliament in 2017. She won a New Zealander of the Year Local Hero Award in 2014. In 2016, she started a digital consultancy and artist management agency called TIPS.

The pair also opened a cafe and gallery, Olly, next to the Crystal Palace theatre in Mount Eden. In late 2015, she and Alex Bartley Catt launched The Goods, an offshoot of What’s Good, which opened a pop-up store in St Kevin’s Arcade on Karangahape Road. Later that year, The Lucid Collective held a New New Zealand Fashion Week side-show at the Gow Langsford Gallery and participated in the \”Youthquake\” exhibition at the New York Fashion Museum. In 2018, she won the Access Fund Fund Fund Award for her work in the arts and culture sector. In February 2018, Swar Brick was selected as the local Green MP for the Auckland Central electorate. After the 2017 general election, she announced she would challenge Green MP Denise Roche as the party’s sitting Green Party candidate in the 2019 general election. In the 2020 election she was chosen to stand in the seat again and was drawn from the ballot in February 2018 from the members of Access Fund Bill Bill Bill. Swar brick is Green Party Spokesperson for Mental Health, Drug Law Reform, Education, Arts and Heritage, Tertiary Education, Small Business, Broadcasting, Youth and Local Government.

You want to know more about Chlöe Swarbrick?

This page is based on the article Chlöe Swarbrick published in Wikipedia (as of Nov. 29, 2020) and was automatically summarized using artificial intelligence.