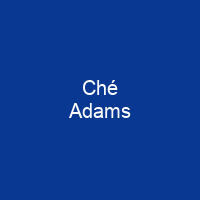 Ché Zach Everton Fred Adams is an English professional footballer who plays for Premier League club Southampton. He began his senior career in non-league football with Oadby Town and Ilkeston. In late 2014 he moved into the Football League with Sheffield United. Adams made 47 League One appearances before signing for Birmingham in August 2016. He represented England at under-20 level in 2015.

About Ché Adams in brief

Ché Zach Everton Fred Adams is an English professional footballer who plays for Premier League club Southampton. He began his senior career in non-league football with Oadby Town and Ilkeston before moving into the Football League with Sheffield United in late 2014. Adams made 47 League One appearances before signing for Birmingham in August 2016. He represented England at under-20 level in 2015. Adams was born in Leicester, where he played football as a youngster for Highfield Rangers. He joined Coventry City’s youth academy as a seven-year-old, and was released at fourteen. He then played youth football for Leicester club St Andrews before joining Oad by Town in 2012. Adams took up a scholarship with IlKeston’s academy, and helped their team win their section of the Football Conference Youth Alliance and reach the second round proper of the 2013–14 FA Youth Cup. In the League Cup semi-final second leg against Tottenham Hotspur on 28 January 2015 at Bramall Lane, Adams replaced Jamal Campbell-Ryce after 74 minutes. Five minutes later he had scored his first goals for Sheffield United with two goals in just over two minutes, which would have taken the game to extra time had Christian Eriksen not scored in the 88th minute of the game. Adams then made ten appearances as Sheffield United finished the season in the League One play-off places. On 10 October, Adams scored twice in the first half of a 3–2 win over Rochdale. Ten days later he signed a new three-year deal at United with the option of an extra year at the end of the year.

He got another goal in a 2–0 win over Chesterfield ten days later, which was Sheffield United’s first win of the season. He was sent off for elbowing an opponent on Boxing Day, and scored hisfirst senior goal for the club to complete a 3-1 win away to Ashton United on 5 April – he made both his first career start and his first Football League appearance, in a 1–1 draw with Walsall at Bramal Lane. Adams finished his season with the Derbyshire Senior Cup final, in which he was fouled for the penalty kick that made sure of Ilk Charleston’s victory. He also played in the FA Cup final against Stocksbridge Park Steels, and made his debut as a very late substitute in a 3 2 win away in the 3–1 win. He made his professional senior debut on 16 December in a1–0 home victory over Southampton, replacingJamal Campbell- Ryce at half time as United made it to the semi-finals of the League cup. Adams also played for the Northern Premier League side in the 2014–15 season, scoring twice in a 4–0 victory over Trafford. He used strength and pace to take the ball from his own half to score; against Ashton United and FC United of Manchester, he usedstrength and pace in the second half of the match. He added to eleven assists in the next match, against Trafford – and by end of October, when 45 scouts were reported to be watching him score his ninth goal of the month.

You want to know more about Ché Adams?

This page is based on the article Ché Adams published in Wikipedia (as of Dec. 07, 2020) and was automatically summarized using artificial intelligence.