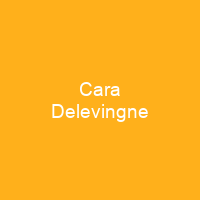 Cara Jocelyn Delevingne is an English model, actress, and singer. She won Model of the Year at the British Fashion Awards in 2012 and 2014. Her most notable roles include Margo Roth Spiegelman in the romantic mystery film Paper Towns and the Enchantress in Suicide Squad.

About Cara Delevingne in brief

Cara Jocelyn Delevingne is an English model, actress, and singer. She won Model of the Year at the British Fashion Awards in 2012 and 2014. Her most notable roles include Margo Roth Spiegelman in the romantic mystery film Paper Towns, the Enchantress in the comic book film Suicide Squad, and Laureline in Luc Besson’s Valerian and the City of a Thousand Planets. She was scouted by Burberry’s Christopher Bailey in 2012 while working part-time in the office of a fashion website. Her godfather is Condé Nast executive Nicholas Coleridge, and her godmother is actress Joan Collins. She has dyspraxia and found school challenging. In June 2015, in an interview with Vogue, she talked about her battle with depression when she was 15. She had her first modelling job at age ten in an editorial shot by Bruce Weber for Vogue Italia alongside model Lady Eloise Anson. She signed with Storm Management in 2009. She worked in the industry for a year before booking a paying job and went through two seasons of castings before landing her first runway show. In an interview after the show, Karl Lagerfeld said: ‘Cara is full of life, full of pep. She’s beautifully brought up and very funny at the same time’ She has two older sisters, Chloe and Poppy Delevinge, and a paternal half-brother, Alex Jaffe. Her maternal grandfather was publishing executive and English Heritage chairman SirJocelyn Stevens, the nephew of magazine publisher Sir Edward George Warris Hulton and the grandson of newspaper proprietor Sir Edward Hulton, 1st Baronet.

Through one of her maternal great-great-grandfathers, Sir Lionel Lawson Faudel-Phillips, 3rd Baronet, Delevingn descends from the Anglo-Jewish Faudels baronets; two of her ancestors on that line served as Lord Mayor of London. She is the daughter of Pandora Anne Delevigne and property developer Charles Hamar Deleveigne. She attended Francis Holland School for Girls in central London until she was 16 before moving to Bedales School in Steep, Hampshire. This was the beginning of what would turn out to be a long-lasting professional relationship with Chanel’s head of creative director and creative director, Ken Lagerlefeld. She started her acting career with a minor role in the 2012 film adaptation of Anna Karenina. Her first catwalk appearance was at the February 2011 London Fashion Week, walking for the Burberry Prorsum AW collection. She commenced the early 2012 season by walking in the Chanel Haute-Couture spring show at the Grand Palais. She walked in six shows during the Milan Fashion Week and walked for Fendi, Trussardi, Moschino, Blumarine, DSquared2 and Dolce & Gabbana. She exclusively walked for Burberry prorsum Womenswear AW 2012 show.

You want to know more about Cara Delevingne?

This page is based on the article Cara Delevingne published in Wikipedia (as of Nov. 29, 2020) and was automatically summarized using artificial intelligence.