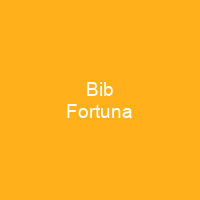 Bib Fortuna is a Twi’lek majordomo and chief aide of the crime lord Jabba the Hutt. He first appeared in Return of the Jedi, the final entry in the original Star Wars trilogy. He has been featured in other Star Wars media, including novels, comic books, video games, and radio dramas. He survives the events of Return of The Jedi in the StarWars Legends canon.

About Bib Fortuna in brief

Bib Fortuna is a Twi’lek majordomo and chief aide of the crime lord Jabba the Hutt. He first appeared in Return of the Jedi, the final entry in the original Star Wars trilogy. He also appeared briefly in the prequel trilogy film The Phantom Menace and in the second season of television series The Mandalorian. He has been featured in other Star Wars media, including novels, comic books, video games, and radio dramas. The character has been described as a fan-favorite and one of the most memorable characters from Star Wars, and has been included on several lists of the best characters in the franchise. An original action figure prototype sold for £36,000 in a 2019 auction. With the acquisition of Lucasfilm by The Walt Disney Company in April 2014, most of the licensed Star Wars novels and comics were rebranded as Star Wars Legends. As a result, storylines and histories established for the franchise before April 2014 are part of the Legends canon, but not the official Disney canon. In the Star Wars Expanded Universe, Bib is born into a wealthy family and grows up as a slave trader before working as a smuggler of an illicit substance called ryll from the Outer Rim. He secretly despises his master and actively plots to assassinate him and take over his criminal operation. He is originally from the planet Ryloth, the Twi’lek homeworld, and was sentenced to death on his home planet of Ryloths.

FortunA is the first Twi-lek character to appear in Star Wars. Although few details about him were revealed in his film appearances, other StarWars works have established his back story, including his past as aslave trader. He was created by Lawrence Kasdan and George Lucas and was designed by Phil Tippett based upon early sketches by concept artists Nilo Rodis-Jamero and Ralph McQuarrie. It took about eight-and-a-half hours to apply the character’s makeup for the first time in Return Of The Jedi, which included extensive casts and molds, a large rubber headpiece, day glow orange contact lenses, sharpened false teeth, and claw-like finger extensions. The dialogue in the film is delivered in Huttese, the fictional language also spoken by Jabba. In this capacity, he controls most operations within Jabba’s palace on the desert planet of Tatooine. Among these duties are welcoming visitors who come to the palace, and vetting them before they appear before Jabba, who is a slug-like alien and a powerful crime lord in the galaxy. He survives the events of Return of The Jedi in the StarWars Legends canon. However, the new set of official canon created after that acquisition establishes that Fortun a was not killed during the climactic battle featured in Return of the Jedi, but assumed Jabba’s place as crime lord until being killed by Boba Fett five years later.

You want to know more about Bib Fortuna?

This page is based on the article Bib Fortuna published in Wikipedia (as of Dec. 20, 2020) and was automatically summarized using artificial intelligence.