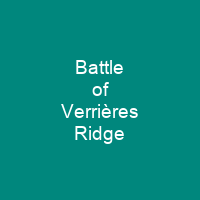 The Battle of Verrières Ridge took place from 19 to 25 July 1944. It was fought as part of Operation Atlantic and Operation Spring. The immediate Allied objective was Verriéres Ridge, a belt of high ground which dominates the route from Caen to Falaise. The ridge was occupied by battle-hardened German veterans.

About Battle of Verrières Ridge in brief

The Battle of Verrières Ridge was a series of engagements fought as part of the Battle of Normandy, in Calvados, during the Second World War. The main combatants were two Canadian infantry divisions against elements of three German SS Panzer divisions. It took place from 19 to 25 July 1944, being part of both Operation Atlantic and Operation Spring. The immediate Allied objective was Verriéres Ridge, a belt of high ground which dominates the route from Caen to Falaise. The ridge was occupied by battle-hardened German veterans, who had fallen back and entrenched to form a strong defensive position. Strict German adherence to defensive doctrine, as well as strong and effective counterattacks by Panzer formations, resulted in heavy Allied casualties for little strategic gain. From the perspective of the Canadian 1st Army, the battle is remembered for its tactical and strategic miscalculations. The most notable was a highly controversial attack by The Black Watch of Canada on 25 July, in which 315 of its 325 soldiers were killed, wounded or captured. Despite having significantly more combat experience than their Canadian counterparts, the British units played a minor part in the battle. Although a major D-Day objective for Commonwealth forces, the Allied push inland was halted short of Caen and positional warfare ensued until the first week of July. On 19 July, the Calgary Highlanders attempted to take the northern spur of the ridge. In a follow-up attack on the same day, the Canadian 2nd Armoured Brigade eliminated several machine-gun positions on either side of the spur.

The battle was won by the Canadians, but the British 2nd Army secured part of Bourguébus Ridge and managed to gain a foothold on Verriés Ridge but were unable to dislodge its German defenders. While failing to achieve its original objective, an important strategic result of the battle was to aid the overwhelmingly successful Operation Cobra, by tying down powerful German Panzer formations that might otherwise have been moved to counter-attack Cobra. The British 7th Armoured Division, 51st Division, and the Guards Armoured divisions were later made available in the shape of three divisions from the British I Corps: the 51st Division, the GuardsArmoured Division and the British 7st ArmouredDivision. The Canadian 3rd Infantry Division, having taken heavy casualties during the first six weeks of the Normandy campaign, was given a supporting role. The 12th SS Divisions held the ridge supported by artillery, tanks and mortar emplacements. The 9th SS Division held in reserve was available from the 272nd Grenadier Infantry Division, 116th Panzer Division and a battalion of Tiger tanks. Two powerful German formations, the 1st SS Panzer Divisions and Martin Martin, were dug-in across the River Orne, supported by a third battalion of A-67 Highlanders. The 3rd SS Division was sent to the Sherbrooke Fusiliers to eliminate several machine gun positions on the northern side of the spur of Point Point.

You want to know more about Battle of Verrières Ridge?

This page is based on the article Battle of Verrières Ridge published in Wikipedia (as of Nov. 03, 2020) and was automatically summarized using artificial intelligence.