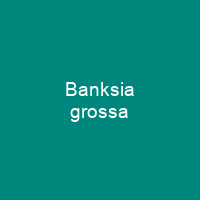 Banksia grossa is a species of shrub in the family Proteaceae. It is endemic to Southwest Australia. It grows as a many-stemmed shrub to 1 m high with narrow leaves. Flowering occurs throughout the cooler months of March to September.

About Banksia grossa in brief

Banksia grossa is a species of shrub in the family Proteaceae. It is endemic to Southwest Australia. It grows as a many-stemmed shrub to 1 m high with narrow leaves. Flowering occurs throughout the cooler months of March to September. Flower spikes develop woody follicles which bear the seeds. After bushfire, the shrub regenerates from its woody lignotuber. Bushfires also stimulate the release of seeds, which germinate after disturbance. The seeds are the largest of the series Abietinae of all Banksia species. They are made up of a cuneate seed body, 1–1.5cm long by 0.4–0.9 cm wide, and a bright green coton. The seed is the same shape as the body next to it, with an impression of an impression on the body. It can grow up to 1.5 m high and has a diameter of 8 or 9 cm. The flowers are rusty brown to golden brown, and consist of a hairy 3. 4–4. 5 cm long tubular perianth which opens at maturity to release the dark red to purple style. The style is curved at the tip. Visitors to inflorescences include insects and a nocturnal mammal, the white-tailed dunnart. It takes five to eight weeks for a flower to develop from bud to the end of flowering.

About three weeks before the flowers open, they develop a strong musky smell. The opening of flowers occurs sequentially, starting at the bottom of the inflorescence and sweeping through to the top over a period of around two weeks. Some flowers produce so much nectar that it drips to the ground. After flowering, the old florets wither and curl against the spike, giving it a hairy appearance. Now known as an infructescence, it is roughly ellipsoidal, 6 to 10 cm high and 4 to 8 cm wide. It was first formally described in 1981 by Alex George and is one of 14 species of banksia in the series. All of which bear predominantly cylindrical or oval inflorescenceences. Although they are only 2 to 3 mm wide, they are still thicker than those of other members of theseries. The margins of the leaves are straight with no teeth and rolled over, and the upper surfaces are sparsely hairy when young, but later hairless. Young stems have a coating of woolly hairs, while older stems are covered in flaky pale brown bark.

You want to know more about Banksia grossa?

This page is based on the article Banksia grossa published in Wikipedia (as of Oct. 29, 2020) and was automatically summarized using artificial intelligence.