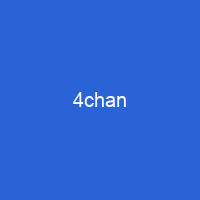 4chan is an anonymous English-language imageboard website. Launched by Christopher Poole in October 2003, the site hosts boards dedicated to a wide variety of topics. Unlike most web forums, 4chan does not have a registration system, allowing users to post anonymously. The site has been described as a hub of Internet subculture.

About 4chan in brief

4chan is an anonymous English-language imageboard website. Launched by Christopher Poole in October 2003, the site hosts boards dedicated to a wide variety of topics. Unlike most web forums, 4chan does not have a registration system, allowing users to post anonymously. The site has been described as a hub of Internet subculture, with its community being influential in the formation of prominent Internet memes, such as lolcats, Rickrolling, and rage comics. 4chan is the Internet’s most trafficked imageboard, according to the Los Angeles Times. As of November 2019, the pol, v, vg, and b boards receive the most daily posts. The majority of posting on 4chan takes place on imageboards, where users have the ability to share images and create threaded discussions. The 4chan servers were moved from Texas to California in August 2008, which upgraded the maximum bandwidth throughput of 4chan from 100Mbits to 1Gbits. In January 2009, Poole signed a new deal with an advertising company; in February 2009, he was USD 20,000 in debt, and the site was continuing to lose money. In a 2011 interview on Nico Nico Douga,. Poole explained that there are approximately 20 volunteer moderators active on 4chan. 4chans has been the target of occasional denial of service attacks, for instance, on December 28, 2010, when 4chan and other websites went down due to such attacks, which Poole said was an attack on the ranks of the MasterCard, Visa, et al! The site was created as an unofficial counterpart to the Japanese imageboard Futaba Channel, also known as 2chan, and its first boards were created for posting images and discussion related to anime.

It is provided to its users free of charge and consumes a large amount of bandwidth; as a result, its financing has often been problematic. The most popular board is the pol board, with more than 900,000 posts made every day. It has 70 imageboards and one Flash animation board, divided into seven categories: Japanese Culture, Video Games, Interests, Creative, Other, Misc. , and Adult. Each board has its own set of rules and is dedicated into a specific topic, variously including anime and manga, video games, music, literature, fitness, politics, and sports, among others. A capcode may be used to attribute the post to a user, but who cannot post with a capcode is grounds for immediate dismissal. As making a post without filling in the \”Name\” field causes posts to be attributed to \”Anonymous\”, general understanding on 4Chans holds that Anonymous is not a single person but a collective of users. Moderators generally post without a name even when performingsysop actions. Revealing oneself as a member of the 4chan community is a violation of the site’s terms of service, but is not grounds for dismissal. In December 2010, 4channers were the subject of an attack by the other other 4chan users, which led to the site going down.

You want to know more about 4chan?

This page is based on the article 4chan published in Wikipedia (as of Dec. 03, 2020) and was automatically summarized using artificial intelligence.