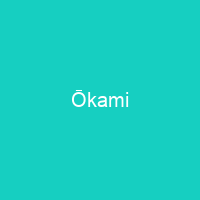 Ōkami is an action-adventure video game developed by Clover Studio and published by Capcom. It was released for PlayStation 2 in 2006 in Japan and North America, and in 2007 in Europe and Australia. A port for Wii was developed by Ready at Dawn, Tose, and Capcom, and released in 2008. A spiritual successor on the Nintendo DS, Ōkamiden, was released in Japan in September 2010, followed by North America and Europe in March 2011.

About Ōkami in brief

Ōkami is an action-adventure video game developed by Clover Studio and published by Capcom. It was released for PlayStation 2 in 2006 in Japan and North America, and in 2007 in Europe and Australia. After the closure of Clover Studio a few months after the release, a port for Wii was developed by Ready at Dawn, Tose, and Capcom, and released in 2008. It features a sumi-e-inspired cel-shaded visual style and the Celestial Brush, a gesture-system to perform miracles. A spiritual successor on the Nintendo DS, Ōkamiden, was released in Japan in September 2010, followed by North America and Europe in March 2011. The game received critical acclaim, earning IGN’s 2006 Game of the Year. It is now considered to be one of the best video games ever made, as well as an example of video games as an art form, aided by the improved art details and graphics resolutions. The gameplay style is a mix of action, platform, and puzzle gaming genres. It has been noted by many reviewers to have numerous similarities in overall gameplay style to The Legend of Zelda series, an inspiration that director Hideki Kamiya, a self-proclaimed Zelda fan, has admitted has influenced his general game design. The main story is primarily linear, directed by Amaterasu’s guide Issun, though numerous side quests and optional activities allow for players to explore the game world and take the story at their own pace. Players can bring the game to a pause and call up a canvas, where the player can draw onto the screen, either using the left analog stick on the DualShock controller, Joy-Con, or PlayStation Move.

This feature is used in combat, puzzles, and as general gameplay in subsequent remakes. For example, players can create strong wind, cut enemies by drawing a loop through them, or fix bridges by painting on the broken one. Rare Demon Fangs can be earned through combat which can be traded for unique items that are beneficial in gameplay but not required to complete the game. Weapons inspired by the Imperial Regalia of Japan can be equipped on Amaterasu as either main or sub-weapons, and used in addition to other melee attacks. At the end of combat, money is rewarded to Amaterasu, with bonuses for completing a battle quickly and without taking damage. The money can be spent at merchants and dojos across the land, featuring healing goods, better weapons, tools, key items for completing quests, and combat techniques. Amaterasu earns Praise, which can then be spent to increase various statistics of the character, such as the amount of health and number of ink wells for Celestial Brush techniques. Combat is staged in a ghostly virtual arena, and Amaterasu can fight enemies using a combination of weapons, fighting techniques and Brush methods to dispatch the foes. The Celestial Brush is possible to upgrade or modify certain powers later in the game; for example, the power called \”Inferno\” can gain a new power called Fireburst, which allows players to create different patterns and patterns.

You want to know more about Ōkami?

This page is based on the article Ōkami published in Wikipedia (as of Dec. 07, 2020) and was automatically summarized using artificial intelligence.